These only relate to use of Call Operation actions, i.e. when the activity diagram is used for functional decomposition using operations. Issues found during robustness testing: 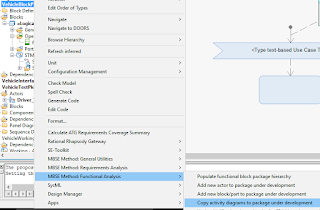 ... the plugin will now make sure that the Analysis Only check-box is ticked on the copied diagrams. 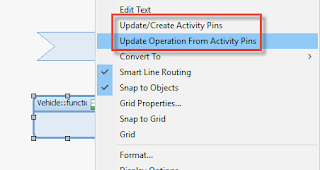 #245 11-OCT-2017: Fixed exception on CallOperation action drop when using detailed ADs with Ops (F.J.Chadburn). This may relate to changes to Rhapsody behaviour between versions, i.e. it was working for some but not all versions, hence I changed the hook used to get the element to be more robust.

Essentially, when the FunctionalAnalysisPkg package structure is added you can right-click a AD to create a more detailed one.

When you drop a CallOperation on the diagram, the plugin will pop up a dialog that allows you to create the Operation for a Block that is part of the system assembly.

The Operation is added to the Block and hooked to the Call Operation automatically, thus speeding up the process of building a list of re-usable functions. 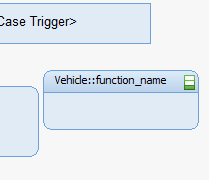 Note: This also works when you're doing white-box modelling. If your _SystemAssembly block has more than one part which is not an actor or test driver, then a dialog will be popped up by the plugin to ask you which Block to add the operation to.