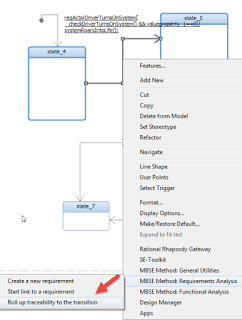 This will present a dialog allowing you to choose the requirements that relate to the associated trigger, guard and action(s):

The requirements will be populated on the diagram: 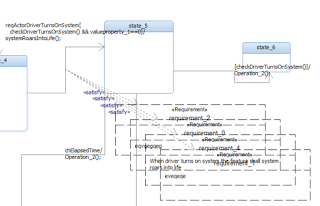 #225 25-AUG-2017: Add check that pre-conditions with text must trace to at least one requirement (F.J.Chadburn)
#226 25-AUG-2017: Fixed exception when creating FunctionalBlockHierarchy and the RD already exists (F.J.Chadburn)
Posted by MrC at 07:51 No comments:

I added a confirm dialog to the way that the Gateway project dialog comes up (to try and lessen the surprise plus give the ability to delete and re-create - which is often required when you create a project in the same location as an existing one). The main thing in this pre-release is the ability to choose a stereotype when creating a block and to be able to create a block/part part in a single menu command. The combination of these two commands makes it quicker and easier to build white box simulation models. I also made a change to  block led me to make the instance name explicit in the SD template (e.g. a block called Lock might be used to type multiple parts like a frontDoorLock and a rearDoorLock) and there's a small enhancement to include deriveReqt relations in the recently added Select menu.