The main thing here are robustness improvements to reduce issues when user opens multiple Rhapsody clients, namely to give a warning. Also some users keep asking how to add pre and post conditions to AD, so I added to toolbar to remove them having to ask. Plus a couple of little tweaks discovered during testing.

#238 04-OCT-2017: Improve ability to add new UC pre or post conditions to the AD (F.J.Chadburn). Added these to the AD toolbar propagated to packages that have the RequirementsAnalysisProfile applied. It just makes it easier for users who are new to Rhapsody who are using simplified activity diagrams to model use cases. Had to add stereotypes to profile as built in Precondition/Postcondition stereotypes used before were constrained by properties prevent their use in toolbar. 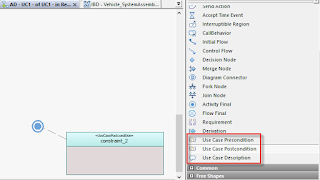 #241 04-OCT-2017: Fixed TableL - Use case refinement relations so that it works as expected post 8.2 (F.J.Chadburn). Oddity, but for some reason Use Cases were not selected in the shipped profile (probably dates back to the 8.2 upgrade). All fixed now though.

#243 04-OCT-2017: Added ability to do smart link from a testcase to create a Verification (F.J.Chadburn). Again, a small thing I noticed as being useful.