There's nothing urgent in this one, just a bit of polish that helps me with white box simulation building.

#231 27-SEP-2017: Enhanced tooltip now shows the req't text when hovering over traceability relations (F.J.Chadburn). I did this because I found I was often navigating to the end of dependency to be able to read the requirement text, hence this enhancement saves a lot of time when working in concert with textual requirements as the formal hand-off.

#232 27-SEP-2017: Improve move unclaimed req'ts needs so that it handles read-only packages better (F.J.Chadburn). Essentially, the helper won't provided referenced packages as an option to move into. Note: The method allows for the RequirementsAnalysisPkg to be added by reference, e.g., it can be developed by a different modeller in parallel! (the so called "Wing-person" approach to modelling where the Wing person is building and testing the requirements into a simulation that can then generate the test cases).

#234 27-SEP-2017: DesignSynthesisProfile no longer sets property to hide part/Object name on IBD (F.J.Chadburn). This is a better default. Of course, the user can override if they wish.

#235 27-SEP-2017: FunctionalAnalysisProfile now sets ObjectModelGe::flowPort::ShowName to Name only (F.J.Chadburn). This is a slightly better default when doing flow-based modelling and coarse-grain sim work as type is considered detail. Of course, the user can override if they wish.

#236 27-SEP-2017: Improved Add new Block/Part... dialog to allow naming of part (F.J.Chadburn). Of course, this menu is a available in a bunch of places and is used when building white-box simulations. It means you can create a part/block and stereotype it in one action (next thing will be to ask using to populate part on the IBD if there happens to be an IBD open). This is all about making it simpler for modellers to handle the part/Block model in SysML. The Helper also asks if you want to update the simulation SD template automatically to include the part. 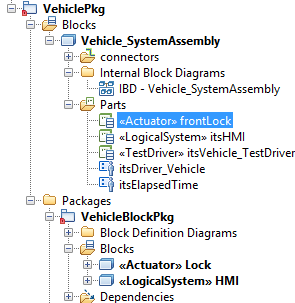 #237 27-SEP-2017: Resolved Java path problems with Entry in certain versions of Eclipse (F.J.Chadburn). This is really just an SCM issue, if you want to configure the code using RTC, rather than GitHub.
Posted by MrC at 11:24