I thought I'd give a demo of latest helper...

Fraser will demonstrate creating an executable “concept of operations” OMG SysML model from scratch with requirements traced in DOORS. He will use an open-source alternative to the Harmony-SE toolkit and explain how it has evolved slightly differently in order to fit with the experiences he's  seen in the automotive market. Advanced and exploratory techniques will be touched on such as using Object-Orientated inheritance of black-box behaviours, coping with iterative and evolving use case models, as well as use of tool automation to reduce training needs during deployment. Aligning SysML/UML usage to the graphical notations familiar to automotive control engineers expectations, using state-based behaviours with continuous conditions, flowing data between controllers, and automatically building test plans/cases from executing the system specification will be touched on based on aspirations to use standards-based SysML modelling in automotive feature development.
Posted by MrC at 12:03 No comments:

I added a couple of enhancements that have been in development for a while. This is about using flow-ports to build a white block simulation. There's also a helper to create part/Block at same time (essentially removing manual steps to make things quicker when building a white box simulation). I would normally hold off during new features but I wanted these in ahead of an IBM webinar...

#214 09-JUL-2017: Tweak Link from TimeActor to be a new term "connector" when creating block hierarchy (F.J.Chadburn)

#215 09-JUL-2017: Change GlobalPreferencesProfile so that Link name is not shown on IBDs by default (F.J.Chadburn) 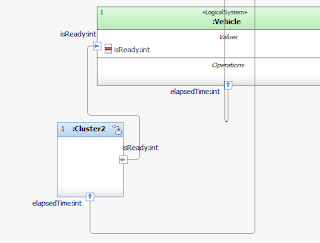 The main improvement here was around Populate requirements for SD(s) menu command. This wasn't working quite as expected for updating existing diagrams, so I fixed it and filled it out a bit by adding a new dialog. The reqt size is also taken based on the Default size, hence the user can choose a different default size if they want.

#209 04-JUL-2017: Populate requirements for SD(s) based on messages now supported with Dialog (F.J.Chadburn)

There's a couple of small fixes here plus a quite big improvement to the Select Depends On/Dependency element(s) menus as people are using these and finding them useful in lieu of a better populate on diagrams (e.g. they multiple select the requirements or elements in the browser which you can then drag on to a diagram).

#206 25-JUN-2017: Removed ReferenceUnitPath from .properties to fix profiles missing $OMROOT (F.J.Chadburn). Essentially, I found that if you set General::Model::ReferenceUnitPath property then it also sets a relative reference for the profiles (which isn't what you want) hence if you send your model to someone else the profile(s) may not be in the same location. Since property was not essential for the profile, I've removed its use. 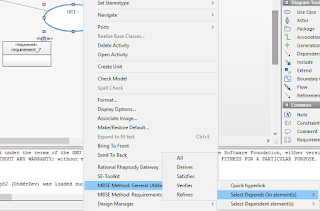 #208 25-JUN-2017: Updated GlobalPreferencesProfile to allow for Rounded Rectilinear options (F.J.Chadburn) - Essentially because Rhapsody stores the possible values as well as the overridden selection, it's necessary to un-override and re-override to have the full list if new enumerations are added (which is what I did).

Note: I can confirm that no known changes are needed to use profile with 8.2.1 (which has just been released). Using profile with version less that 8.2 is difficult though (i.e. requires some tweaks due to the way that Query elements changed). That said, it's not impossible if you know how.
Posted by MrC at 06:32 No comments: